Steve is a seasoned broadcasting and marketing professional.

Steve started professionally in radio at age 15 and has never looked back.

He spent 17 years of his TV news career reporting and anchoring the news in Miami and Orlando... winning numerous awards, including several Emmy awards.

He's anchored the Drum Corps International World Championships on PBS, ESPN, and via live cinecasts for 38 years and counting.  Steve's work has earned him election to the DCI Hall of Fame.

Steve has seen the equation from all sides:  as a broadcast journalist, on-air performer, station owner and manager, and most recently as Marketing and Broadcast Media Manager at French Lick Resort.  He knows what it takes to get the job done right.

Outstanding in his Field

Don't take our word for it.  Here's what the pros say about RondoWorks

"Steve is the consummate pro.  He's very much at ease on-camera in live and scripted situations; in a studio or on-location.  He's incredibly steady.  We've worked together nearly 30 years and he continues to nail it."

​   "Steve Rondinaro has done it all for me over 15 years of working with the National Auto Dealers Association:  anchoring, reporting, turning voice overs on a moment's notice on-location and from his local studio.  He was just as smooth reporting from Capitol Hill as he was at a local car dealership."

"Steve is a rock solid anchor, reporter, interviewer and writer.  But he was

Steve Rondinaro a great addition to any team or project."

"Steve has hosted our live NightBeat event in Charlotte and Winston-Salem over 15 years.  He always engages the crowd and makes the event special, despite some crazy circumstances that have come up.  Once Steve picks up the microphone we know that part of our event is in good hands." 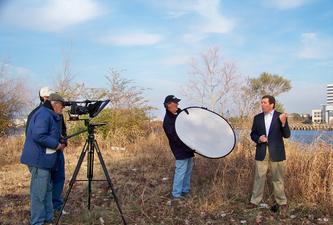